It’s hard to believe but Transvideo is now in its fifth decade of existence. Founded in 1981, we have been making videos since Jimmy Carter was in office, since VHS and BETA were the big new things, and before the Internet, and…well, you get the idea.

There have been major changes over the years – from the construction of our state-of-the-art studio in 1992 to the formation of our creative agency, Picturelab, to an ownership change in 2017 – through it all, we have continued to create excellent videos for our clients worldwide.

To celebrate, here are some of our favorite videos.

Blippy Explainer Video
Featured on TechCrunch, this video showed the power of an explainer video. It took a very controversial product and made it fun. The startup didn’t survive – it was a very risky idea, after all – but our explainer succeeded in alleviating a lot of the concerns people had about using it.

Checkpoints Explainer Video
We love animated explainers, and we love character animation most of all. Especially when the characters are round squishy little guys. Oh, and it doesn’t hurt that the product was pretty cool, too.

Quest for Credit
Yes, we actually did an animated short. More branded content than a commercial, this epic adventure for Mint explored the dangers of mismanaging your money. I wish I saw this my Freshman year in College!

Google Maps Street View Launch Video
Yes, the Street View launch video! It’s hard to believe there was a time before Google Street View. But in 2007, it was a new thing and Google asked us to create a launch video to show how it all works. This video amassed 2 million views on YouTube in 2 days, and currently is at 13 million.

Mint: A Trillion Dollar Visualized
The entire world was going through some tough times at the end of the 2000s. Trillion dollars seemed like another number being thrown around at this time. But to visualize it is staggering. This branded content piece for Mint helps us to see what a trillion dollars, which was only one tenth of the bailout during the Great Recession of 2008, looks like.

My Cup of Tea featuring Varsha Saxena
We created some branded content pieces for Sloths Tea. One of our most enjoyable projects, we found normal people doing what makes them happy and made a micro-documentary out of them. Here’s one in the series of videos we created for this tea brand.

NORAD Santa Tracker 2008
For Christmas 2008, Google and NORAD teamed up to track Santa’s journey so people could follow along. We were there to document it all as shown in this fun highlights video.

Pebble iOS Notifications Launch
We love wearable tech. And though Pebble eventually shut down and the IP purchased by FitBit, we had a blast making this video in 2013.

As you can see, Transvideo has had a strong 40 year run so far as a premier video production company, and still going strong. If you would like to be a part of our on-going history, contact us at info@transvideo.com.

Long gone are the days of splicing film, but videos are still relatively expensive to make.  It may often seem like an investment with little tangible rewards.  Most companies don’t really know how to quantify the success of online video.  An outbound video like a television commercial is relatively easy.  An infomercial will result in calls while it airs.  A Super Bowl ad will also see a spike in website hits and engagement on social media.  Those results are easy to see.

But what about online video that sits on your website or on a video platform?  When asked what metric they use to assess the success of their video, one company marketing person said the only metric they know of is the number of views on YouTube.  So, more views equal success…?

That doesn’t make any sense since the video is supposed to increase engagement with your brand, not with the video itself.

So how do we know videos are successful?

Below is an informative infographic on the general usefulness of video (courtesy of Hyperfine Media).  It doesn’t tell us how your video has helped your brand specifically, but it does tell us that videos are important in converting buyers from the top of the funnel to the bottom.

Click-through rate leads to 200-300% when video is included in an email.

Buyers are 64% more likely to buy a product online after watching a video.

Most popular form of online video content is comedy.

Videos increase brand association by 139% and purchase intent by 97%.

Takeaways from this data:

If you’re in the business of selling something, make a video, and include it on your site and emails.

Make sure your video has a clear call to action so that viewers can act before they move onto something else, or forget about the video altogether.  There are way too many distractions.

Comedy is a good way to get people’s attention.

Also, the infographic says, “Dr. James McQuivey estimates that one minute of video is equal to 1.8 million words.” I’m not sure who Dr. James McQuivey is and I’m not good at math, but sounds about right if a picture is worth a thousand words and there are 24+ frames per second.

This is a common scenario for us:

We get a call or email from a client who needs to shoot an executive or client in the next week or less. It’s a conference or meeting or a reaction to some current event they want to capture and share with the world. They thought they could do it themselves but decided, last minute, they want a professional video production company.

When we ask them why they decided to hire a professional, the answer is usually that they wanted to make sure it was done.

And that’s the reason why video companies like Transvideo has existed and thrived. Even in this digital age where a phone can shoot a feature film, there are technical and aesthetic reasons to hire people who have years of experience making videos.

In most cases, you only get one shot to get it right. The CEO isn’t going back up on stage to re-do his keynote speech because you had technical difficulties the first time around. Your client won’t be happy if he has to repeat the same lines over and over again on a testimonial video because your equipment isn’t up to par.

Knowing the technology and tools of the trade is a requirement.

Well, I know how to use my phone to shoot a video.

Sure, you can. Go right ahead. But that leads to Reason #2….

Your video should look good. You want something on social media that’ll die in a week or less. Okay, go ahead, in that case use your phone. But if you’re shoot a video of a CEO, client or an influencer, you want the video to look good. Because when they look good, it makes your brand look good.

Hiring a professional company like Transvideo or our creative sister company, Picturelab, will ensure you are also receiving the look you want for your video. We are film and creative experts, in addition to doing just video production.

When we’re setting up a shot, we’re not just thinking about technically recording the subject, we’re also thinking like directors of a feature film — angles, color, mise-en-scène. Yes, even for a talking-head corporate video.

Not everyone might notice all the details we consider because we do it right. But audiences will usually notice the details if they are done wrong, and that will affect your brand.

So, even for small shoots, use a professional corporate video production company.

Interactive Data has been riding a wave of creative recognition with us for the past few months. Recently, the commercial campaign that we created for their eSignal product won a 2016 Pixie Award for Outstanding Motion Graphics & Animation. And now we’re proud to announce that this campaign has also won the 2016 Gold Communicator Award of Excellence in the Financial Services Commercial category.

eSignal is an online trading platform for use by professional day traders. We wanted to highlight the platform’s powerful tools that traders use to benefit their work and the financial interests of their clients.

These commercials manage to blend the need to make a highly specialized software feel warm and inviting to the general public without simplifying it’s professional strengths.

Our heartfelt congratulations to the team at GeneWEAVE for winning the First Place trophy of the Dx Creative Communication Awards! They won for best tradeshow and another First Place for the animated video we produced for them. 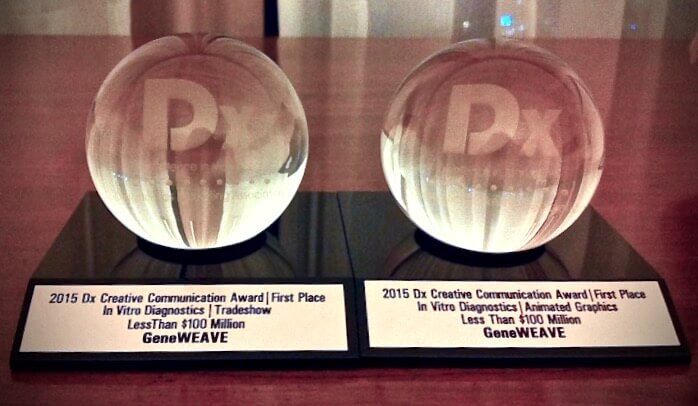 Using design standards inspired by our Integrated Videos, the video was created to exist in harmony with its environment. The looped video begins and ends in a design that completes the logo element within the tradeshow booth.

With GeneWEAVE’s Smarticles technology, we expect them to make a big impact in the biomedical industry and to perhaps revolutionize the way we treat bacterial infections.

It was a pleasure working with them, and it looks like everyone’s hard work is getting recognized.

The project we just completed is a commercial spot for eSignal, currently airing nationwide. eSignal is a platform designed for dedicated, professional day traders and we wanted to emphasize the sophistication that eSignal guarantees its users. 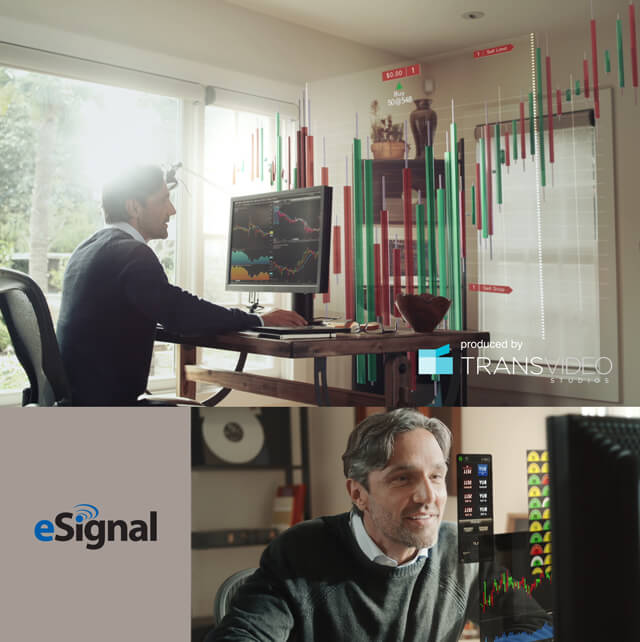 The 3D graphics bring eSignal to life, mirroring actual features within the product. This is some of our best work to date and we couldn’t be prouder of our team.

Produced by Transvideo Studios and its creative division, Picturelab

Transvideo Studios has been in business for more than 30 years.  During this time, we have learned a lot from working with the largest companies in Silicon Valley, and beyond.  As a result, here is what any client can expect when working with us: